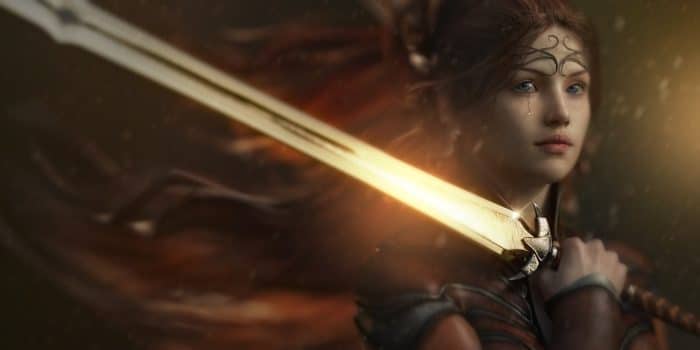 Aella smiled, and then nodded. She turned to the stairs and continued climbing. I watched her until she disappeared into the darkness. Then I stood motionless for about a minute before I felt a disconcerting presence behind me. I turned.

“Aella!” I could hear my own scream in my ears.

Then…the world dissolved before my eyes into abstract darkness.

Stepping into the dark room from the stairs, everything was quiet. I scanned around quickly; my aura’s vision was not impaired by the dark. Although the things I saw were not of the same colour as when seen through normal sight, they were definitely truer. I lowered myself to a crouch and stealthily snuck behind the cover of an adjacent and strategically-positioned table. This had to be the teacher’s desk, I thought. I raised my head. From where I was, stretched the whole room’s view. There were desks arranged accross the expanse of the room in neat rows. The enemy could be anywhere behind them, I imagined, smiling to myself. That was not going to be a problem. I cast out my aura into the area. If there was anyone lurking in the murk, I was going to find them for sure. Gently, my senses caressed the desks as my aura flowed cautiously over all objects it met. At the end of my rifle, the only sign of life in the vicinity was a petrified rat scuffling with its spoils in a corner.

Must have been you, Mr Rat, who set off the false alarm…

Without a human host, the Nephilim needed some living essence to interact with our physical world. In manifested form, they existed in a partly corporeal and partly ethereal state; I would have sensed their unnatural essence had they been anywhere near the place. So convinced of no danger, I stood up and walked over to the lights’ switch I had just located. A snappy push of my finger brought the unsuspecting fluorescent lamp right above me to a flickering resurrection. I scanned the brightened room once more. Satisfied I hadn’t missed anything, I left the room for the stairs, supressing the sound of my feet on the stone steps with my aura as I walked down slowly.

From the last step of the stairs, I could see Nik seated in his chair at the centre of the room. His back was to me and he probably hadn’t heard me coming. I smiled at the thought of him. Walking to the centre of the room as quietly as possible, I touched him on the shoulders. He turned to me, the features of his face morphing from Nik’s distinctively African blend into ones that I had not seen for over a thousand years.

“Aquarius!” I shouted in shock. I felt my aura come out of me instinctively and its power clothed me like a protective cloak. My clothes changed into the white satin dress of my aura. I summoned my twin swords and they answered my call immediately. Wielding the glowing blades, I slashed at Aquarius. He pushed his chair back in lightning speed and it slid just as fast with him on it.

With my aura out, I could pursue him faster than lightning and I wasted no time. I flew at top speed towards him, my eyes delving into his greens that were filled with mirth as we drifted in motion. He was enjoying this, that treacherous Forsaker!  Aquarius tossed his blonde hair back and smiled at me while we coasted through the air, locked in the tango.

Incensed, I pushed forward and closed in on the distance between the chair and I. Just as I was about to slash at him, Aquarius back-flipped off the chair. He soared three metres into the air and landed in a crouch in front of me. I stopped a few metres before him, my swords in hand. Aquarius lifted his form leisurely, chuckling with every bit of derision he could gather.

“My dear Aella, is that the way to greet your beloved betrothed after a millennium of parting?”

“You are not my betrothed!” I denied vehemently, barely containing my ire.

“Yet you touched my shoulders so, umm, let’s see…so encouragingly?” Aquarius taunted.

“I’m not going to argue with a Forsaker. Let Theos be the judge of your soul when you burn in the fires of Gehenna. Where is Nikolasi?” I asked, mustering calmness.

“Nikolasi?” Aquarius asked in a thoughtful voice. “I don’t know any of our friends from our sweet past going by that name. But wait, dearie, let me recall….”

“Tell me where Nikolasi is! I have no time for your foolish tongue,” I demanded.

“Aella dear, why would you be asking me this question?” Aquarius inquired, sauntering towards me. The chair he had sat on was between us. He walked up to it and slithered his fingers on its frame. “Why’s he so important anyway?” he asked indifferently. Aquarius’ flawed character had remained indifferent to time, I thought. He seemed to be the same exact master at cat and mouse games. And though a millennium had passed from the last time our paths had intertwined, I had no doubt he could still beat around the bush the whole day. I did not plan on giving him that chance.

“It’s none of your business. Everything about me stopped being your business long ago when you turned your back on Theos and the Way of Allos.”

“Your Theos and His Angeions of Allos are mundane matters to me. He never gave me anything, but I have power now.”

“It was Theos who made you an Angeion in the first place! You are lost, Aquarius. You have followed the path to your own damnation.”

“Lost, Aella?” Aquarius asked, chortling wickedly. “I am more powerful than ever! I can summon the powers of Gehenna. What do I need Ouranous for?”

I could not stand his profane talk and I dove towards him swords raised. I could feel my aura absorb the energy of the universe and it flooded through me. I coasted in lightning speed straight towards where he stood. Aquarius stepped back as quickly as I came and evaded my attack. He lifted his hands and burst into red flames as he let his aura out.  I could feel the taint of Gehenna in his aura; he had merged his light with the Dark.

Aquarius’ blade materialised in his right hand.  I whirled in swift motion and slashed at his left side as I channelled more energy into my sword. Aquarius parried with his three-foot snake-like blade and the air rippled with the shock of the clashing powers. I manoeuvred quickly to his right and released an energy ball from my crossed swords. The ball of blue light hit Aquarius’ raised sword and threw it off-balance. Ceasing the opportunity, I struck the swaying sword with my foot. The blade flew from his hand, soaring freely into the air. But before I could capitalise on the disarmament, Aquarius had back-flipped and caught his sword in the air with his left hand. The move forced me to switch gears, closing one door but opening another in his decent. So I leapt towards Aquarius fast to take advantage of his hasty landing, instead.

I did not see him release the energy ball which flew right at me, catching me sorely unprepared.  The concentrated power in the attack was enough to tear the roof off. I could not let it hit me. In the fraction of the second as the glowing sphere flew to me, I let my mind clear and then I whispered.

‘No weapon formed against me shall prosper’