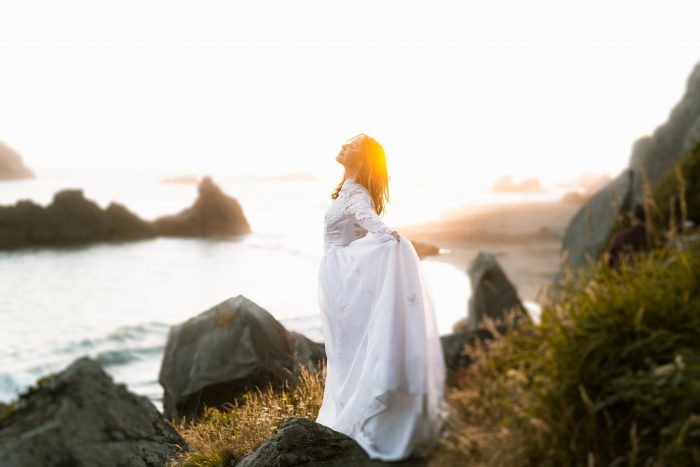 She was as beautiful as I remembered. Her hair flowed in silky black curls over her shoulders and her smooth cream-coloured skin was observably flawless. I could hardly hide my happiness and relief. She saw it and smiled at me. I stretched my arm and my palm touched the rock. Just like in the dream, the glassy surface felt hard and cold at first, and then my skin warmed up when her delicate palm broke about a thousand laws of modern science to brush softly over mine. My heart was intoxicated.

This moment, though, was where my dream had ended-right here. I had no idea what lay ahead, I realised. And I hated not knowing.

Comprehension of the reality that she was flesh and blood still evaded me. Now that she was out of the mysterious rock, I noticed that the girl was wearing a sleeping gown. That was weird. Though not quite as eerie as the way she had slipped through solid rock like it was liquid. When I had touched her palm, the rock became passable and she had waltzed effortlessly out of it.

“Hi miss, I’m Nikolasi. What’s your name?” I asked after my shock had abated. We were both standing next to the entrance of the room, in between the door and the clear rock.

“Hello… Nikolasi. I’m sorry… I-I can’t remember my name,” she answered. Fright was evident on her face, and confusion too. Somehow, I felt crushed to see her that way.

“Do you recall anything?” I asked. “How you got here, maybe?”

“Nothing…,” she answered softly. I watched as she moved away from the rock as if she was petrified of it. She stopped at some distance, the faint light streaking through the window making bright her face. I could not take my eyes off of her and neither could I keep myself from marvelling at her vision. How could I let the girl before me, as vulnerable as she was, come to harm? I had to suggest it.

“Do you have a place to stay?” I asked. My English was doing really great up to that moment and I smoothed on. “If you don’t, you can crash at my home for the night. Then we can inform the police tomorrow and maybe find out something about you.”

“I’d really appreciate that,” she answered in a whisper, “I’m sorry…for the inconvenience, I mean.” Her voice sounded so sweet and feminine. Coupled with her beauty, it made me disregard the air of mystery surrounding her appearance. Her British inflexion was apparent, though; probably a clue about where she was from. Were it not for our strange meeting-it defied even the logic in my wildest dreams-I’d have thought she was a tourist; Mombasa never lacked them. The thought of that took me back to reality. My heart raced at the thought of a girl spending the night at our house, especially one so ‘ferociously’ enchanting. I was almost eighteen and had never had a sweetheart. Yeah, I know how weird that sounds. Then again, I was hardly a ‘normal’ teenager. I always over-engrossed with my studies. More so, my high school being single-sexed didn’t do much to help any of it. Anyway, contrary to that thought founded in your mind in this very moment, I was not a nerd. Far from it; I was pretty much appreciably looking, all modesty aside, of course. I was tall and athletic. I had a light brown complexion, square jaw, rectangular-shaped dark brown eyes and soft black curly hair. Besides, I had the girls here drooling over me…or so I thought. Not that it mattered, though; my social life was almost at its eighteenth death anniversary. Simply put, I had no female friends. My elder sister, Imani, was nearly all that I knew about girls.

“So, what’re we waiting for?” she asked, flashing what was clearly a set of textbook teeth. Her abrupt change of attitude hit me. At that moment, she reminded me of the spirited girls from the Nickelodeon shows I had grown to like with nostalgic passion- the shows.

“Please don’t look at me that way. You’ll make me blush,” she confessed innocently.

“Oh, I’m sorry,” I apologised and looked away with the appropriate aptness.  She laughed merrily at my reaction; I thought it was the sweetest sound on earth.

“This way,” I blurted out as I reached for the door and opened it. She went ahead of me into the pitch darkness. “I’m afraid you have to feel your way to the next door,” I added as I dived into the murk myself. “I had a flashlight when I came in but I… Umm, let’s just say it’s probably enjoying its vacation somewhere in this very dark.”

“Give me your hand,” the girl whispered, ignoring my declaration of utter inanity. That made me wonder what it was that she had in mind. If only she could see the puzzled look on my face…

On a normal day, I would have run my legs out in fear at that outrageous declaration. However, today was anything but ‘normal’. Not to mention the casual manner with which she had confessed to me her ‘superpower’-it seemed to have an unprecedented effect of downplaying my fright. So instead of freaking out, I stood immobile with indecision as I considered her offer. She, on the other hand, had no intention of letting me decide and before I knew how to react, the girl had slipped her hands into mine, turning all the doubt and fear within me into paralysing coyness. If she could truly see in the dark then I wonder what she would think of the current look on my face.

“Don’t be so red-faced either,” she chuckled as she entwined her arm into mine- that just had to be intentional! I was surprised when we went straight to the door without bumping into some wall. Some part of me had clung to reality where ‘natural’ night vision existed only in fantasy movies; the other part beheld her unearthly grace and believed she was ‘special’. “So, what kinda name is Nikolasi?” she asked as I opened the door to the ante-room.

“It’s actually pronounced as Nikolasi,” I answered. “Like, you break it into syllables ‘Ni-ko-la-si’ and don’t stress any of them.” I was certain the first thing I’d see if the room was suddenly awash with light would be her look of utter confusion. “It’s the Kiswahili form of Nicholas,” I tried to offer a prior explanation.

“Nikolasi,” she said to herself. She had pronounced it correctly this time and I thought it was the most amazing thing. Most native English speakers had difficulty with all the rules Swahili shattered- English language rules at least. “It’s an interesting name, I really like the sound of it,” this time her speech was directed to me.

“Thanks,” I replied, feeling strangely good about my name.

“An average-sized house with one sitting room, a kitchen, four bedrooms, one bathroom, a small garden at the back and a toilet,” I summed it all up in a sentence.

“Perfect,” she answered. “Umm… How about your family, Nik? I can call you that, can’t I?” I couldn’t keep the laughter in my voice when I replied.

“Of course, you can.” I already liked the sound of my nickname on her tongue. “Well, they’re nice. Don’t be worried about hospitality,” I added quickly.

“I wasn’t,” her merry voice rang from the pitch blackness. I stared into its general direction, trying to form a mental picture of the expression that had to be on her face at that moment. Then the filament lamp flickered back on without notice. I lifted my eyes quickly when I realised that I was staring right into hers. The light made me more aware of her presence and I could not help but be nervous.

“We take the stairs,” I told her and started off.

The stairway was too narrow for two people and we had to climb up in a single file. We got to the Old gate at last, after the long flight of stairs. I opened the oak door quickly, wanting to leave the confinement of the basement as soon as I could. If I still doubted that she was real then perhaps the outside air would help me put things into perspective.

I went through the door first and stepped on the porch of the Old gate. With the door open, the night breeze rushed into the stairway, brushing gently on her face as she stepped out. Her soft black hair glided in the breeze in an enchanting dance, mesmerising me. The porch was slightly higher that the last step and I offered my hand out to her as she stepped out. I took her hand and as her skin touched mine, an unimaginable feeling ran through me. I felt her consciousness flow into mine, as if our minds had connected. From one moment to the next, I could feel her emotions and hear her thoughts. It was the sweetest feeling in the world; all the loneliness I never knew I had had been lifted off in an instant.

But then without warning, all the euphoria in me came crashing down as the contents of her head processed through my mind. In an instant, the giddy lamb in me had become a raging bull.

One thought on “Angeions Episode 3: Aella”